– We are not one – lets celebrate!

Building enormous structures leaves behind an impressive legacy but it’s almost always not great for humanity.  On Easter Island in the middle of the Pacific Ocean there are the 900 iconic and amazing Moai statues from 10 to 30 foot tall the building of which resulted in ecological suicide for the people of the island as they cut down almost all the trees of the island to build them.  The Empire State Building and Chrysler Building in Manhattan were commissioned and began to be built in 1929.  The era of the first great skyscrapers in New York City took place just before the Wall Street crash and both buildings started life unlettable.  The New York World Trade Centre destroyed in 2001 and Sears Tower in Chicago were both built as the tallest buildings in the world of their time in 1972-1974 just before the world oil crisis recession.  In Kuala Lumpur the Petronas Tower, the tallest building in the world in 1997 was built immediately before a crash in the Asian economy.  In Jewish history King David did not build anything significant and built the Jewish nation, but his son Solomon built the Temple in Jerusalem and right after his reign the country split into two kingdoms.

You would have thought the unified sense of purpose which makes great building projects from the tower and city of Babel onward to our own day was an unmitigated good thing.  Yet human experience certainly suggests otherwise, from the disasters which happen whenever we try it.  The hundred and ten compact words of the Babel story tell us that one unified humankind all working together is not God’s plan.

In the portion of Noach the flood is literally an “act of God”.   That is nature’s threat to humanity – survived by Noah and his family and the animals of the Ark.  Babel though is a presage to all of the disasters which will be an “act of man”.  Throughout the twentieth and now into the twenty first century the worst violence and destruction has come from the Babels of our time.

When an ideology which says that “we have the solution for all humanity” spawns its natural progeny – authoritarianism, dictatorship and disgusting violence against those who do not or will not follow it.  Nazism, Stalinism and now Islamicism in the guise of ISIS and Al Qaeda all have a rhetoric that they are trying to create one ideal unified humanity.  The result is always the disregard of humanity.

The ideology that there is one way to be and one way to go and one purpose follows the Midrash from Pirke de Rabbi Eliezer which Ruby quoted in her Dvar Torah – when a human being is killed in the project – or even six million human beings of the “wrong” type – that does not matter.  The only disaster to these Babel builders is when one brick of their ideology falls down.   The more they succeed the worse it is – the higher they build the narrower the vision.

A human vision of complete unity is very far from God’s vision, says our Tower of Babel story when God says “now whatever they decide to do they will be able to achieve”.  God stops the project by mixing the languages because he knows that those aims will be for a restrictive and dead uniformity which will, as these things do, result in the end of humanity not the beginning.   The gunman or bomber trying to murder in Canada, New Zealand, Manchester, Iraq or Egypt in the name of the Islamicist Caliphate is part of a Babel that must never succeed.

It is critical that people are not seduced by unity as an ideal in itself.  The Babel story tells us that a good future of humanity is always going to be found in diversity.  Religious diversity, cultural diversity, political diversity.  When Noah comes out of the Ark and is speaking about the future of his sons he says “For Japhet, God will make ample room; he shall dwell in the Tents of Shem.” In our Talmud (Megillah 9b) Raban Shimon ben Gamliel interprets these words as showing that we will always learn from the peoples around us – there will always be a place for the Greek influence among the Hebrew, the diversity of his time.

We can see this in the way in which we have some chance of combatting the Corona virus.  One unified world solution is extremely unlikely to work.   Local solutions working with the cultural needs of the populations affected will be what we need.  The way in which this will succeed will be diverse and local.  What works in Madrid will not be the same as what works in the slums of Calcutta.

The Torah portion of Noah presents us with a very different version of the World than the one we heard last week in the portion of Bereshit.  There the world was one – it was green and beautiful and simple – Eden with just one man and one woman.  All together.  Or so it seemed until Cain’s jealousy of Abel in the single way of living resulted in the first murder.  Then over ten generations the world grew so violent and corrupt that God pressed the reset button, turned it off and turned it on again with the flood.

The new vision of the world which begins in next week’s Torah portion right after the Babel story will not be one of uniformity.  God is one – we are many.  God celebrates that diversity and so should we.  Noah in the opening words of Parashat Noach walked with God but that was not enough.  Instead this portion will end at the final begetting with Abraham.

Abraham, as the theologian Karen Armstrong points out, does not walk with God but rather walks before God (Genesis 17:1).  That means that Abraham – the first covenental Jew will challenge God when he perceives injustice.  Abraham will respect the diversity of the world, make alliances with people not like him, live in a strange land and make his way.

A good world is rainbow coloured – the covenant of the rainbow with which God promises Noah the world will never again be reset or destroyed is not ever uniform in colour – its colours represent every part of the spectrum of difference.  May we continue to build a Judaism what celebrates and embraces diversity and a world where we work with every person and every people’s individuality with respect. 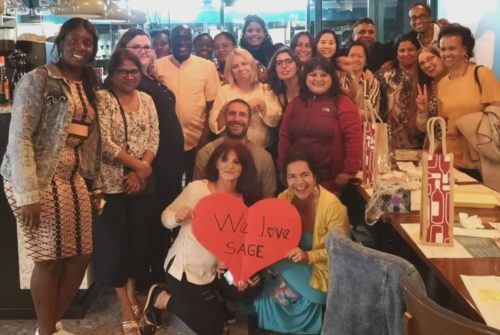 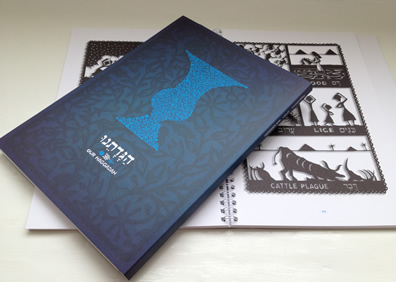